As promised, I'm back........ to tell you guys about my Homemade Coconut Leave In Conditioner I made with stuff lying the house. I always wanted to invest in a good leave in conditioner, but for some reason I have never gotten around to doing so. I usually end up using my cowashing conditioners as a leave in, which is there is nothing wrong with, I'm just saying that it is something I've yet to do.

Now that I have my Homemade Coconut Leave In,  I don't think I'll ever need to!

It's purpose is to moisture my tresses after cowashing.

It consists of, (canned) Coconut Milk ( did not use the whole can, the 'milk' separated itself from the rest of the liquid, so I used the 'milk' part, and discarded the water), Probably close to if not half a bottle of Suave Naturals Tropical Coconut Conditioner, Expeller Pressed Coconut Oil, and Castor Oil, I also put a pinch full of Shea Butter, not sure how much it contributed, being that it was such a tiny amount. (Pic of products used below) ( You do not have 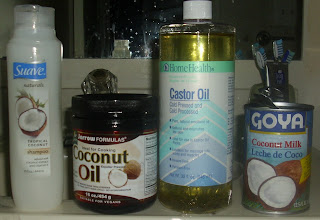 I chose those products because coconut milk to be moisturizing, and since it was the base of my leave in, I wanted to make use of the Coconut Oil, and 'Coconut' conditioner I have, I find that Coconut Oil softens hair, and is great for sealing, I added the Castor Oil for it's hair thickening properties, and it also gives hair a nice sheen! So this Leave in is Moisturizing & Sealing in one!

I did not use measurements ( I think everyone's hair is different, so I would just use according to how much YOU need), I just put what I thought would be best, and put it in my spray bottle I got from Sally Beauty, a while ago. I can't remember how much it cost at the time, but I don't believe it exceeded $5.00 USD. The spray bottle is $3.59 USD on the Sally Beauty website, $3.29 USD if you own a Sally Beauty Club Card.


After putting all my ingredients, I put my finger over the spout so it would not leak, and shook the bottle to mix it. Here's how it looked in the bottle. 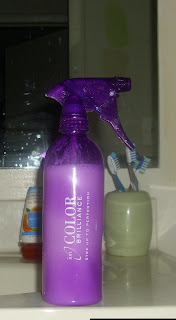 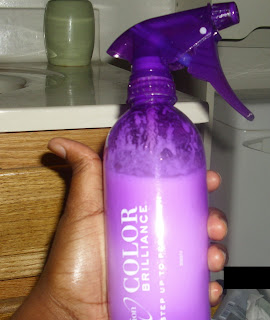 It has more of a watery consistency, than creamy, but it makes a great spray leave in, which I find is less heavy, and easier to distribute than that of a creamy conditioner. It left my hair extremely soft, with a really nice sheen. I think I am in love!

The oil does separate from the rest of the ingredients, so you have to shake it up before use.

You guys can try making this leave in yourself, or try making your own concoction with your favorite hair products!

(I think everyone should have an applicator bottle, and a spray bottle in your arsenal for mixing oils, refreshing your hair, etc.)

Naomi
United States
In the process of discovering my natural hair, in all it's beauty.